Donati Gomme S.r.l. was established in Parma in 1980 by the Donati, a family that had been working in the first plant supply industry as of the early 1960s.

One of its major strengths is an extensive presence throughout the Italian territory, formerly as a seller of complete wheels, and then also of spare parts.

Donati Gomme stands out in the spare parts industry for product quality, fast deliveries and a special attention to the customer's needs before and after sale. Post-sale assistance is particularly important in agricultural mechanics and Donati Gomme is a milestone in the field, also due to its highly skilled staff.
As early as the first years it was established, the company had such partners as Pirelli, Michelin, Goodyear, Firestone, Kleber and Taurus, the most renowned producers of agricultural and industrial tyres.

From the early 1990s, Donati Gomme have extended their market to an international level and have become exclusive distributors for goods produced in emerging countries.
To satisfy a raising customer demand, in the late 1990s the company made considerable investments in terms of new technology and trade deals with the major companies in the industry, and started producing all types of wheels for industrial and agricultural machinery.
This new sector supplies the major constructors, both with standard and custom-made service.

The range also includes a wide series of accessories and parts, such as wheel axes, axle shafts, air tubes and nut-and-bolt works.

Thanks to its great variety, productive flexibility and exclusive collaboration with Indian and South Eastern Asian suppliers, Donati Gomme has become a leader in the complete tyre market and has expanded its clientele all over the world. 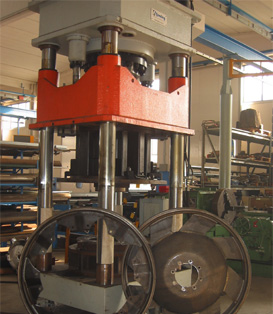 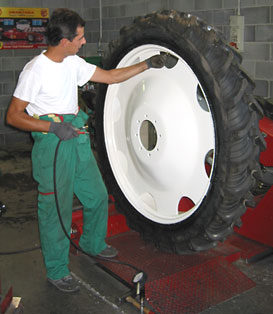